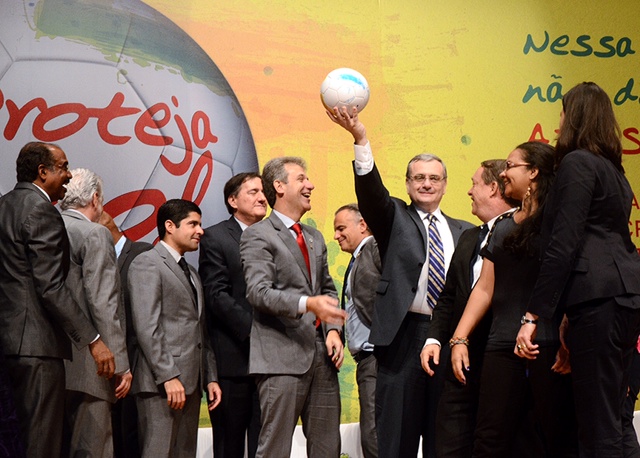 Campaign uses the convening power of sports to empower young people to access HIV prevention, treatment care and support services SALVADOR, 9 June 2014—The UNAIDS' Protect the Goal campaign has been officially launched at a special event in Salvador, Brazil, on the eve of the 2014 FIFA World Cup. The event, supported by the United Nations Population Fund (UNFPA), the Government of the State of Bahia, the Municipality of Salvador and the Brazilian Health Ministry, was held in the emblematic Castro Alves Theatre, in Salvador on 9 June.

"Football is unique in the way it unites people from all sectors of society around a common passion," said Michel Sidibé, Executive Director of UNAIDS. "We want to harness that passion and solidarity to engage everyone involved in this World Cup in our efforts to ensure that young people around the world protect themselves against HIV and have access to lifesaving HIV services." Of the 35.3 million people living with HIV worldwide, around 4.6 million are aged between 15 and 24 years old.

During the 2014 FIFA World Cup in Brazil, with the support of state governments and local municipalities, over 2 million condoms and 2 million leaflets will be distributed across the 12 World Cup host cities and free rapid HIV tests will be offered at local Fan Fests. Other cities such as Aracaju, Porto Seguro, Ribeirão Preto, Santos and many more have joined the campaign and schools in the state of Bahia are participating with contests and HIV training programmes.

Brazilian Health Minister Arthur Chioro said that "this project, carried out in partnership with UNAIDS, is one of the Ministry's many efforts towards implementing innovative HIV prevention strategies for young people."

Kweku and Ndaba Mandela, grandchildren of late South African leader, are spokesmen of the campaign and will also take part in the ceremony, as will Miss Jamaica World Gina Hargitay, a youth leader of the Protect the Goal campaign.

The Brazilian National Team's vice-captain and UNAIDS Goodwill Ambassador David Luiz is another important spokesperson. "People will be looking at my country, wanting to see great football during the World Cup. This is a great opportunity, so I want to help UNAIDS and be part of the winning team against HIV," said the star player.

Protect the Goal was first launched at the 2010 FIFA World Cup in South Africa. To symbolize the strong links between Africa and Latin America a 'Protect the Goal World Tour' was launched during the friendly match between South Africa and Brazil in March 2014. The tour saw the passing of a football to the Heads of State of the African and Latin American countries participating in the 2014 FIFA World Cup, being signed by the Heads of State of Algeria, Cameroon, Côte d'Ivoire, Ghana, Nigeria, Argentina, Chile, Colombia, Costa Rica, Ecuador, Honduras and Uruguay.

The campaign has also garnered support from leaders in the worlds of culture and football, including the Confederation of African Football (CAF); the Confederation of North, Central America and Caribbean Association Football (CONCACAF); the South American Football Association (CONMEBOL); and the Asia Football Confederation (AFC). It is also supported by Michael Ballack, former captain of the German national team and UNAIDS Goodwill Ambassador and the Ivoirian striker Gervinho (Gervais Yao Kouassi) who was recently announced by UNAIDS as an Ambassador for Protect the Goal.