A Quantum leap forward for “Protect the Goal” campaign 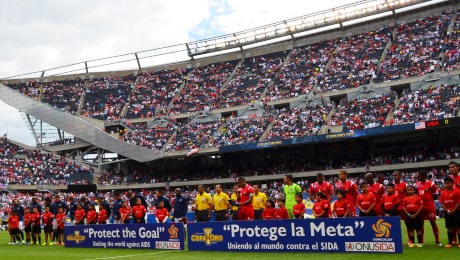 Chicago, 28 July 2013 — The "Protect the Goal" campaign made a quantum leap forward at Soldier Field stadium today as the captains of national football teams from the United States and Panama competing in the final game of the 2013 Confederation of North, Central and Caribbean Association Football (CONCACAF) Gold Cup soccer tournament pledged to raise awareness of HIV in the football community.


The "Protect the Goal" banner was displayed prominently on the pitch prior to the game, in front of an announced crowd of 57,920 fans. Damarcus Beasley, the captain of the U.S. team and Roman Torres, the captain of the Panamanian team, read a statement calling on players , football fans and young people to support the campaign. The 1-0 victory over Panama gave the U.S. its fifth Gold Cup title.

"We are extremely happy to continue to support UNAIDS in their efforts to roll out the Protect the Goal campaign," said CONCACAF President Dr. Jeffrey Webb. "Presidents of national football teams in our organization have embraced the campaign message to speak out on HIV prevention in their countries."

"We are honoured to have Dr. Webb as a strong advocate for UNAIDS vision of Getting to Zero," said Senior Adviser Dr. Djibril Diallo, who represented the Executive Director of UNAIDS at the tournament. "Leadership from CONCACAF will be key as we gear up to the 2014 FIFA World Cup in Brazil."

CONCACAF has also promoted the "Protect the Goal" campaign during games in Los Angeles, CA, July 7; Harrison, NJ, July 8; and Portland, OR, July 9. As part of the campaign, each of the participating teams carried the campaign banners before the games and a pledge was read by the team captains..

In April 2013, UNAIDS and CONCACAF signed an agreement in which both organizations agreed to combine their efforts to promote the "Protect the Goal" campaign and raise awareness about HIV/AIDS, particularly among the youth.

In Latin America, the situation among youth is of particular concern given that less than 30 per cent of those aged 15 to 24 years correctly identify how to prevent sexual transmission of HIV, and condom use in this age group remains low, while only 30 per cent of women aged 20 to 24 report using condoms during last sexual activity.