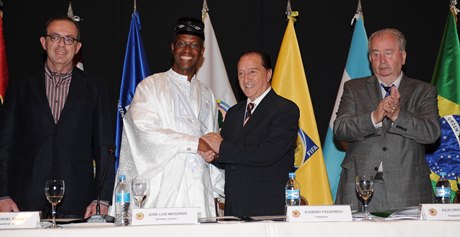 Asuncion, Paraguay, 1 August 2013 — The South American Football Association (CONMEBOL) and the Joint United Nations Programme on HIV/AIDS (UNAIDS) today signed a Memorandum of Understanding (MoU) in which both organizations agreed to combine their efforts to promote UNAIDS "Protect the Goal" campaign and raise awareness about HIV/AIDS, particularly among the youth.

The signing ceremony took place on the occasion of the extraordinary congress of South America's soccer governing body in the presence of President Eugenio Figueredo and Senior Adviser Dr. Djibril Diallo, who represented the UNAIDS Executive Director Michel Sidibé.

The main objectives of the MoU are to carry out joint advocacy and communication activities in competitions organized by CONMEBOL, one of the Fédération Internationale de Football Association's (FIFA) six continental confederations, in support of the "Protect the Goal" campaign, a brand new initiative within the framework of UNAIDS' sport for global advocacy that was launched at the 2013 Orange Africa Cup of Nations in South Africa. The campaign highlights the power of protection and fosters HIV prevention and treatment, in advance of the 2014 FIFA World Cup in Brazil.

"We are eager to work with UNAIDS to improve HIV education and enable access to prevention information, medical facilities, treatment and counseling," said CONMEBOL President Eugenio Figueredo. "Through this innovative campaign, we plan to reach out to a wide range of audiences in our region, in particular young people."

"In Latin America, the situation among youth is of particular concern given that less than 30% of those aged 15-24 years correctly identify how to prevent sexual transmission of HIV, and condom use in this age group remains low, while only 30% of women aged 20 to 24 report using condoms during last sexual activity," said Cesar Antonio Nunez, Director, Regional Support Team for Latin America.

The oldest continental confederation in the world, CONMEBOL is responsible for the organization and governance of South American football's major international tournaments. CONMEBOL national teams have won nine FIFA World Cups (Brazil five, Argentina and Uruguay two trophies each). The World Cup qualifiers of CONMEBOL have been rated as the toughest qualifiers in the world.

The Joint United Nations Programme on HIV/AIDS (UNAIDS) leads and inspires the world to achieve its shared vision of zero new HIV infections, zero discrimination and zero AIDS-related deaths. UNAIDS unites the efforts of 11 UN organizations—UNHCR, UNICEF, WFP, UNDP, UNFPA, UNODC, UN Women, ILO, UNESCO, WHO and the World Bank—and works closely with global and national partners to maximize results for the AIDS response. Learn more at unaids.org and connect with us on Facebook and Twitter.

Headquartered in Luque, Paraguay, the South American Football Association (CONMEBOL) is one of the six continental confederations of FIFA.