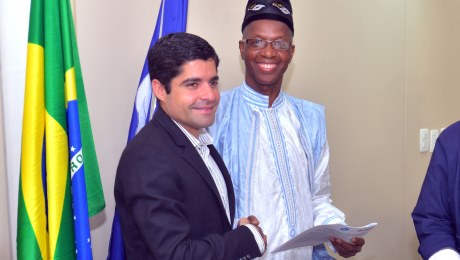 To see the press release in PDF, click here

Salvador de Bahia, Brazil, 5 August 2013 — The Municipality of Salvador in the State of Bahia today signed a Memorandum of Understanding (MoU) with the Joint United Nations Programme on HIV/AIDS (UNAIDS) in which both organizations agreed to work jointly to raise awareness of HIV and mobilize the worlds of sport and culture to promote UNAIDS "Protect the Goal" campaign.

The signing ceremony took place in the headquarters of the Municipality of Salvador at Praça Municipal Tomé de Souza  in the presence of Mayor Antonio Carlos Magalhães Neto of Salvador, Senior Adviser Dr. Djibril Diallo, who represented the UNAIDS Executive Director Michel Sidibé and César A. Núñez, UNAIDS Regional Director in Latin America.

The main objective of the MoU is to establish a technical development cooperation framework in support of UNAIDS vision of "Getting to Zero" in the State of Bahia and carry out advocacy activities in support of UNAIDS "Protect the Goal" campaign, a brand new initiative that highlights the power of protection and fosters HIV prevention and treatment particularly among young people in advance of the 2014 FIFA World Cup in Brazil.

"We applaud the signing of this cooperation agreement that aims to strengthen local capacities and harmonize programmes with other UN agencies," said Antonio Carlos Magalhães Neto, the mayor of Salvador.  "Through this innovative campaign, we plan to enhance cooperation with UNAIDS to mobilize new resources to support local activities in the AIDS response in the state of Bahia."

"We are appreciative of the efforts of the Municipality of Bahia to leverage the convening power of sport and culture to support the Protect the Goal campaign," said Dr. Djibril Diallo. "We look forward to joint efforts with local officials for the successful outcome of the promotion of the campaign."

"This campaign embodies a symbolic movement to use sport  as a key platform to mobilize young people, raise awareness around HIV and reduce stigma and discrimination," said  Dr. César A. Núñez, adding "The signing of the MoU here today  emphasizes the commitment of Brazil and society at large to get to zero new HIV infections, zero discrimination and zero AIDS-related deaths."

Following the signature of the MoU, Dr. Diallo and Dr, Núñez are expected to hold consultations with high-ranking Brazilians authorities in  the Ministry of Sport, City Hall of Salvador, City Hall of Manaus, Government of Federal District, Presidency of Brazilian Association Municipalities, Organizing Committee of the 2014 FIFA World Cup, Department of the STI, AIDS and Viral Hepatitis Department (DDAHV) of the Ministry of Health and the Secretariat of Policies in Promotion of Racial Equality, and the Head Officer of the United Nations system in Brazil.

Globally, an estimated 4.6 million young people (15-24 years of age) are living with HIV. About 2 300 young people are infected with HIV each day. Many young people living with HIV, who are eligible for treatment lack access or do not know their HIV status. In Latin America, the situation among youth is particular concern given that less than 30 per cent of those aged 15-24 years correctly identify how to prevent sexual transmission of HIV, and condom use in this age group remains low, while only 30 per cent of women aged 20 to 24 report using condoms during last sexual activity.